Yes, it’s a name of a famous horror movie and some superstitious people may think I’ll tell you now some terrible or mystical story. Relax :) I’m just going to continue previous theme about English language in Chechen Republic and should begin from the 24th of February, when a first round of “English Language Battle-2” took place, and the second one was on March, 13 (Friday). Let’s begin…
On the 24th of February a first round of republican English language competition took place at the Chechen State Pedagogical Institute (CSPI). 10 teams by 4 members from 3 state institutions and students of Isa Magomadov’s school had to show best results in 4 fields of English - vocabulary, grammar, reading/writing, auding/speaking – and prove they deserve the title “winner”. There are two levels - Elementary and Advanced – by 5 teams in each one.
Due to use of IT together with modern English language teaching educational materials the jury could watch and value teams’ performances of tasks.
The 1st round was a kind of preparation for the next round, which took place on the 13th of March at the faculty of foreign languages, CSU. And the last round will be on March, 28.
As say the organizer of the “English Language Battle” Musa Magomadov, Department of Education and Science of CR has agreed to support the competition and award 30 000 rub. (~$1200) the most talented student.
A great help in organizing the battle gave the Grozny State Oil Institute’s (GSOI) direction:

- I’d like to thank a pro-rector of GSOI Ibragim Gayrbekov for his help, - says Musa. – This is second time when he appropriate funds for the competition. Also a direction of (CSPI) appropriated funds for this event. I can’t not to mention that we suggested to CSU’s direction took part in the organization of the “battle”, but they refused our proposal…don’t know why. 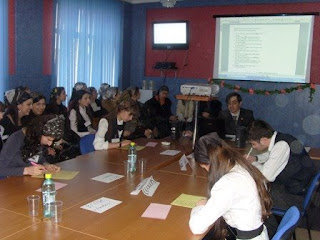 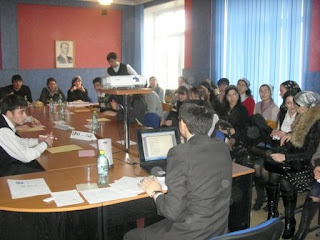