September 28 was the coldest day in Yerevan since the March I guess… It was raining round the clock and stopped close to the evening of Sunday. Luckily it stopped, because the rock festival that was widely advertised - had to take place in a park, under an open sky.
Bands from Georgia, Kazakhstan, Russia, Turkey and Italy, and Armenian bands like Stryfe, Dogma, Vortan Karmir, were announced to be playing. In my memory, this was the biggest ever event of this type in Armenia. Italian band "Sadist" was among the most anticipated ones, since they are quite famous among metal music fans.

I haven't been at rock concerts for a while… some 4-5 years ago I wasn't missing any :) during this one I realized how much I did grow up since then :D
Most of the attendees were teenagers - under the influence of emo, gothic and other subcultures like these. To me it was unusual seeing this much Armenian teenagers with tattoos and piercings. Some years ago these people were quite rare and they were getting much more attention than these young people now. Alternative culture is becoming more and more popular here year by year… When it was my 'age' of attending rock concerts, the 'weirdest' people were guys with long hair and girls wearing large and rude boots, a lot of

Outstanding was fact of the presence of Turkish band "Northern Lights", taking into account the fact of a long-term Turkish-Armenian conflict, and the absence of diplomatic relations between the countries. This was unprecedented event and was interesting for watching the reactions of the public (there are certain masses in Armenia that are against any Turkish presence).
Not surprisingly for me, the audience was welcoming and I didn't notice any display of intolerance. I was wondering if it would be the same with any other concert, especially if it was pop. Yep, even when rock fans are more anti-social, I personally think, they are also more open-minded.
I heard that all of the guest bands wereastonished by the Armenian hospitality which wasn't a surprise for me ;))
It was really cold there and people who liked the music and were dancing had an advantage. Since heavy metal is not my preferred style, I was freezing and left the concert for a hot tea in the middle of performances missing the Italian band, but it was becoming more and more crowded there. 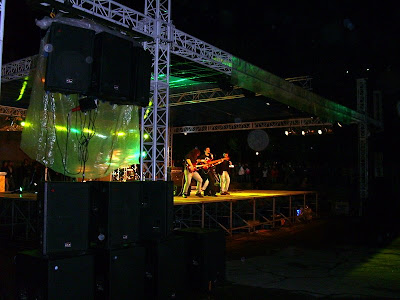 Performance of the Turkish band "Northern Lights"
Posted by Unknown at 06:57