this is about Armenia, as i know it

This is my first post in this blog and I'm going to write about my country.

I'm living in independent Armenia for 17 years now. No I'm not 17, I'm 24. It's my country that just turned 17 year old (we celebrated the Independence Day on September 21).
Republic of Armenia has become an independent state from the Soviet Union in 1991. So I was born in Armenian Soviet Republic.

I won't be giving you encyclopedic data, you can easily find it on the net without me, I will just write my memories and about my perception of Armenia. I've seen the painful process forming of the state being already a conscious schoolchild. September 1991 was not only the month of the declaration of independence, it was also my first month at school.

The declaration of independence followed some not very easy processes in the history of Armenia. In 1988 my country faced a terrible disaster - an earthquake which completely destroyed some cities… caused 50,000 deaths, also among my relatives. Then the movement for independence of Armenia started - with mass demonstrations and rallies.

After the declaration of independence - the war for the Karabakh liberation started. Because of the unstable economic situation and the resources concentration on the war, we had some hard years. Those years are called "dark and cold" years. Because of the earthquake danger, our nuclear plant was closed which was our main source of energy. We had electricity for 2 hours daily... Even not every day. We were buying bread by coupons - each person had a right to buy 250 grams of bread per day. For my family of 5, we were buying one bread and a quarter, daily. Winters of those years seemed even colder. People were heating their houses with some petroleum heaters, or cutting trees in the city parks to be able to burn them in the furnace and heat themselves. We were studying under candle lights, watching black and white small TVs working on 12V car accumulators. And yes, I remember tanks marching on the central streets. I was watching it from the windows of my classroom.

These was my childhood, I don't remember it in dark colors, but my parents weren't, of course, that carefree as us - children. The crisis lasted for about 4 years and after the ceasefire in 1994, my country slowly started to recover. Unfortunately that years we had a lot of people emigrating to another countries - mostly to Western Europe, USA and Russia. Young families couldn't afford the living here and were trying all methods to escape. Many of my father's friends did so. I'm happy and grateful to my parents because we weren't among them.
People that leaved then, won't recognize the country now. It has changed radically. It's growing and developing and becoming a pleasant place for living. And it's safe ! I've heard from many tourists that they had quite different thoughts before coming. I'm happy that the tourist flow is growing year by year and more and more people are getting acquainted with my culture and country.

In my next post I will describe you the things that make Armenia unique and so attractive for tourists, also about the famous inventions that were made by Armenians. I will also tell you why Armenia is the only place I can imagine myself living in. Stay tuned! 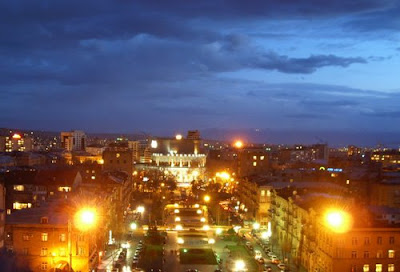 Photo credits belong to me.
Posted by Unknown at 07:27