Hello to everybody. Glad to see you visiting my little world on “ForgottenDiaries” .

My name is Amata, I’m from Grozny – the capital of Chechen Republic. We know that everybody, who takes part in this project, is from some conflict region and very often we hear dangerous things from the regions we live. You know, I’m glad to have an opportunity to take part in this project and hope that after several posts with photos, videos, interesting news of my republic you will see, that Chechen Republic and Grozny are still one of the best of the best and the best))))) And I’m ready to believe you if you say the same about your country.. J

If you visited my republic in 2000 year, or in 2004 y. you could find only ruined cities, villages, and no light in the people’s eyes. But before 1994, before the war, Grozny was the most beautiful and green (because of many parks) city on Caucasus and people from all over the world came here to study in the State Grozny Oil Institute (there were only 2 Oil instates those time).
I’m so sad I was too small to see and remember all sights of my republic, but I can show you what is now here, how we live, how we spend our time and so on…

A very important event happened recently in the life of Chechen Republic. Maybe you heard about it – it’s the 1st International movie festival “Ark of Noy”. Guests from more that 20 countries came here to take part in the festival, to show their works. Mark Dakaskos and Armand Assante – famous Hollywood stars – visited our capital.

You know what was unusual in this movie festival – there were no any film that couldn’t be watched by whole family, I mean with children. And it’s a very rare thing in modern life.

Noy was a prophet who tried to safe people from evil, to make them listen to God. But they didn’t want to do it, they preferred to live while they were alive making harm to each other, sowing promiscuity and wars on Earth. They forgot that for every evil one makes in this life he will pay in another. And only those who followed Noy to his ark stood alive, when God sent a flood on Earth.

So, giving that name to this festival its organizers wanted to show that only good=kind movies are allowed at the festival. I think, you’ll hear about it in news or read in the Internet.

I’ve done some excursus to the past, sorry if it was borring)) This is just the beginning. Next time I’ll tell you about the life of my youth.

Bye for now… Will be glad to hear from you too.. 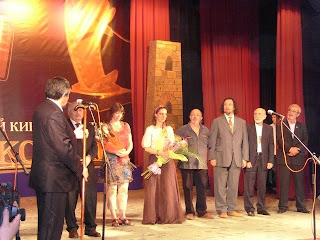 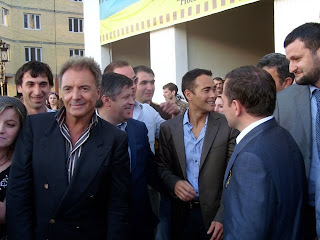 I think it's wonderful you are blogging about your life. Please continue to do so. It is very interesting and informing.

Really, keep on writing, cause unfotunatelly it is not so often you can read about the reality in Grozny

I like your point of view about your country: even with all the conflicts it's still the best country in the world... it's people like you that will make a difference in this world. Congratulations and continue writing, you caught my attention!!

Thanks for your comments, friends.